8 September 2022, Munich – Euro zone inflation is estimated to hit a new record of 9.1% in August 2022 – the highest rate since the Euro became official currency in 1999.1,2 Already in June this year, in an open letter to EU health leaders, the executive committee of Medicines for Europe* shared their concerns about increasing inflation and its looming impact on drug supply chains. They note that the COVID-19 pandemic and the war in Ukraine further add to a challenging situation and called on the authorities to address the cost increases striking the pharmaceutical industry.3

Hence it does not come as a surprise that the most common question we’ve received from our clients over the course of this year was: “How is inflation affecting API prices, are you seeing similar price increases compared to overall inflation?”

To answer this question QYOBO created the “QYOBO 300 index” tracking the prices of the 300 APIs most commonly analyzed by our users on the QYOBO platform. We then compared the YoY changes of the QYOBO 300 index against the global inflation rate (figure 1). The results demonstrate that global API market follows the same dynamic as global inflation, but increases are so far less pronounced than in the overall economy. In the current year the index change was 5.1% compared to 7.0% inflation (when we made the same assessment in June this year, the increase was slightly higher with 5.2%). 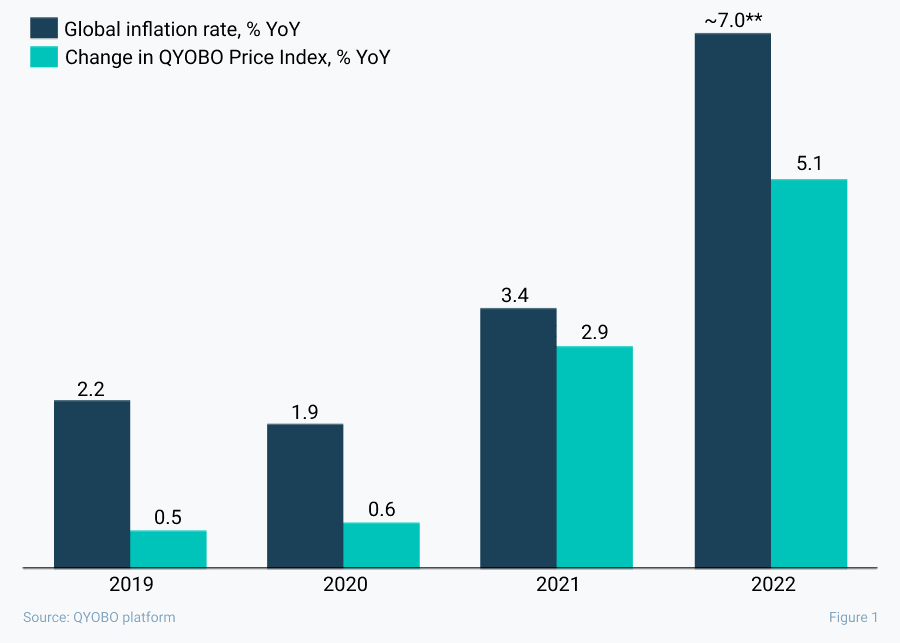 Similar to market cap based exchange-traded funds (ETFs) where a few companies like Apple, Alphabet or Saudi Aramco have a high impact on the index’ development, the QYOBO 300 index (weighted by trade value) is dominated by just over a dozen molecules making up for 30% of the total trade trade value analyzed by our platform.

Taking a closer look at these top 12 molecules in figure 2, shows that 7 of these molecules like Heparin, Paracetamol or Metformin have seen substantial price increases of 21% or more from 2019 until now. However, many of our partners were surprised to learn that other well-known molecules like ibuprofen and rosuvastatin calcium decreased by over 30% in the same time frame.

This finding also provoked the question how transferable index-based inflation really is to the daily business of pharmaceutical companies which tend to have a unique basket of molecules in their portfolio.

With this in mind, we’ll provide a more detailed price analysis of all 300 molecules included in the QYOBO index in the next article. It’ll examine if the growing inflation rate always means cost increases and will give insights, which offer the approach to win from the current economic situation. Meanwhile feel free to reach out to us if you have any questions or want to give us feedback.

*  a trade group comprised of generic and biosimilar drugmakers

To calculate the QYOBO API price index “Total trade weighting” method was applied which combines the information from the 300 Top APIs – the most subscribed products by QYOBO clients – to a powerful industry metric.

The weight for a substance (i) in any given year (y) in the index is based on the total trade (as a product of price Py,i and the volume Vy,i) for the respective year. Po,i is the average yearly price of the base index year (previous to a given year). This approach limits the influence from substances with smaller overall trade size compared to substances with larger trade sizes (such as Ibuprofen, Heparin or Paracetamol) .

Ukraine vs. Russia: How the current political conflict could affect the API market