22 September 2020, Munich – Losartan API prices tripled in a very short period while it was considered as a potential CoViD-19 remedy earlier this year. Other related substances have fared rather stable throughout the crisis, and one well-known “sartan” never recovered from its NDMA scandal in 2018.

In July 2018, valsartan, probably the most commonly known “sartan” by now, received wide-spread media attention. One of the largest manufacturers of the substance, based in China, had to recall several batches of the API from 22 countries in Europe and North America due to contamination with N-nitrosodimethylamine (NDMA), a chemical compound that can cause cancer. ¹

In the months following the discovery of the NDMA contamination, ² ³ prices of valsartan API increased significantly from around 110-120 USD/kg in HY1-2018 reaching a peak of 324 USD/kg (global average price) in March 2019. Apart from comparably minor price fluctuations, prices remained stable towards the end of 2019 and early 2020. While the API price saw a slight decrease towards 250 USD/kg in April 2020, prices never recovered to “pre-NDMA-scandal” levels. Most recently, prices were heading upwards again to around 295 USD/kg in August this year (see figure 1).

During the CoViD-19 crisis, manufacturers of “sartan” drugs faced new concerns, as early studies suggested that valsartan and other similar medications may lead to more serious symptoms in patients infected with CoViD-19. However, the majority of recent studies seems to disprove these findings with some even suggesting that “sartans” (ARBs) and “prils” (ACE inhibitors) could potentially lower the risk of CoViD-19 related death. ⁴ ⁵ ⁶ 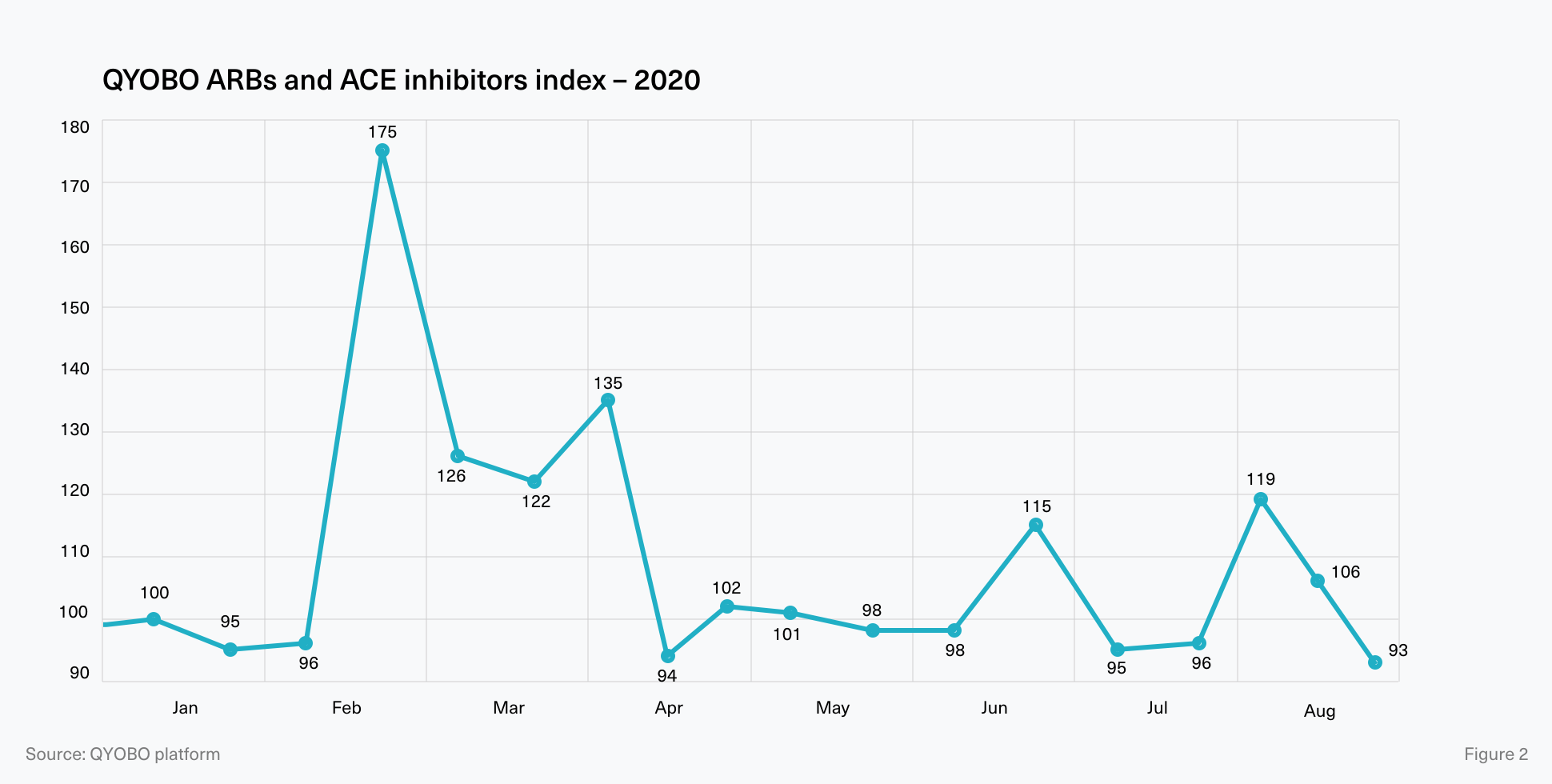 This leads us to the QYOBO API price index (see figure 2) across all ACE inhibitors and ARBs analyzed in the QYOBO market platform (31 “sartan” and “pril” substances and their salts). The data shows a massive increase to 175 index points in February 2020 to almost twice the level in January 2020 (base = 100). However, the underlying cause was of temporary nature (primarily driven by losartan, featured later in this article) and prices dropped significantly to around 122 points mid-March and returned to January levels in April. In the following months until about 2 weeks ago, the index remained relatively stable experiencing comparably minor fluctuations.

As losartan has the most pronounced impact on the above QYOBO index (by total trade, compare approach), it will be the first API to be featured in the following section highlighting market trends of selected ARBs and ACE inhibitors.

After being considered a possible treatment against CoViD-19 (compare QYOBO article), the API price doubled to 224 USD/kg (February 2020) and tripled to 325 USD/kg (early-April 2020) compared to January 2020 prices (106 USD/kg). After the focus had shifted away to other (previous) candidates considered against CoViD-19 like hydroxychloroquine (compare QYOBO article), prices dropped to pre-crisis levels of around 120 USD/kg in April 2020 and fluctuated only slightly until end of August (see figure 3).

Compared to the above-mentioned “sartans”, the market dynamics of ace inhibitors were insignificant. Figure 4 provides two examples, highlighting the API prices of enalapril and ramipril which both remained fairly stable throughout 2020 and until the end of August. The global enalapril API price ranged between 132 and 229 USD/kg (global YTD average = 158 USD/kg). Likewise, ramipril prices varied between 513 and 737 USD/kg (global YTD average = 633 USD/kg) with a temporary peak of around 1,000 USD/kg in April. 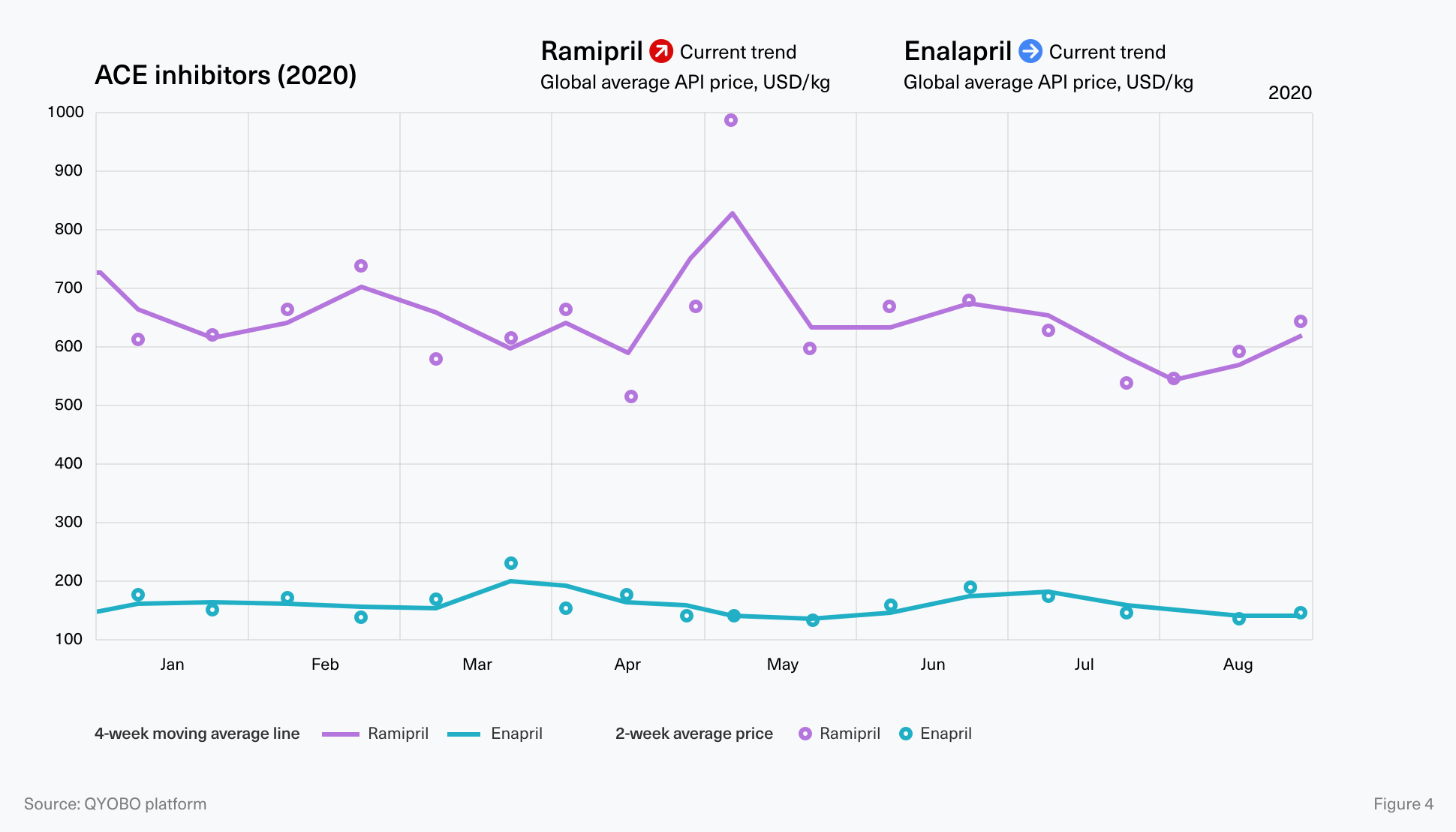 In the current situation, the market dynamics of APIs are obviously affected by their role in the fight against CoViD-19, which can result in a massive demand increase in a very short time frame. This explains the strong price increase for losartan, considered a potential remedy early into the crisis, compared to the stable prices for “prils” (ACE inhibitors) which received little public attention.

The ongoing crisis also has a profoundly different impact both in magnitude and duration on the price volatility compared to previous incidents: During the valsartan scandal, prices doubled within approx. 4-5 months whereas it took less than two months for losartan prices to reach triple their pre-crisis levels. But a silver lining remains: While the losartan price increase occurred faster and reached relatively higher levels, its price also returned to previous levels within weeks – whereas valsartan prices have not recovered in the past two years…

Prices are weighted average prices (weighted by trade volume) for each month. Prices reflect FOB prices (free on board), excluding freight or insurance cost. The price curves for a given substance include data points for all known salts for this substance, e.g. quinapril base, quinapril hydrochloride for “Quinapril”.

This report has been generated leveraging the QYOBO market analytics platform. The big-data powered platform combines trade data, regulatory information and further enriching (nancial data on the market from a large variety of distributed databases around the globe. For its API benchmarks, QYOBO processes over 20 million trade dataset from 18 countries (e.g. Argentina, Chile, China (partially), India, Kenya, Mexico, Russia, the USA, Vietnam) in 8 languages. The time frame assessed for this analysis was January through early July 2020.

To provide an accurate representation of the group, the weighting method for the index is “Total trade weighting” the ARBs and ACE inhibitors subgroups of cardiovascular system group – according to WHO Anatomical Therapeutic Chemical Classification System. The weight for a substance (i) in any given month (m) in the index is based on the total trade (as a product of price pm,i and the volume vm,i) for the respective month. p0,i is the average monthly price of the base index month, January 2020. This approach limits the influence from substances with smaller overall trade size compared to substances with larger trade sizes.

First half of the year

QYOBO’s clients include API manufacturers and pharmaceutical companies in Europe and beyond. In 2019, QYOBO won BASF’s Digital Market Challenge against over 100 startups worldwide. The company has recently been recognized as a “Digital Innovation” by the German Federal Ministry of Economic Affairs and Energy (BMWi) and is one of the 10 most innovative startups according to WECONOMY/Handelsblatt.

Disclaimer: The information in this article is not intended to be used for medication purposes. Please do not self-medicate and consult a physician/doctor for any questions with regard to your personal medicalneeds. This assessment has been prepared adhering to the highest quality standards based on a variety of external data sources (see sources) with the purpose of making distributed information accessible to a broader audience. The information contained in this document is provided on an “as is” basis and QYOBO GmbH assumes no responsibility or liability for the completeness, accuracy, usefulness or timeliness of the information provided. This article contains links to external websites operated by third parties upon which QYOBO GmbH has no influence. QYOBO GmbH does not assume any guarantee or liability for third party content.

⁵ World Health Organization, 7 May 2020.
COVID-19 and the use of angiotensin-converting enzyme inhibitors and receptor blockers.