31 March 2022, Munich – Elevated cholesterol levels are a common challenge in today’s world. This is mainly due to lifestyle choices and can for example lead to gallstones or cirrhosis of the liver. As a hepatoprotective medication*, ursodeoxycholic acid (also known as Ursodiol or UDCA) helps reduce the amount of cholesterol in the blood and can also dissolve gallbladder stones, which are mainly caused by cholesterol. It also supports liver enzymes, protects liver cells from injury caused due to toxic bile acids and thus improves overall liver function.1  Thanks to its antiinflammatory properties, UDCA is also recommended for the treatment of COVID-19 as it appears to be effective in tackling a cytokine storm that’s associated with the virus.2 Hence one may assume that the additional demand resulting from UDCA treatment during the corona pandemic would drive prices upwards. However, a brief market price analysis in the QYOBO platform shows an opposite picture. 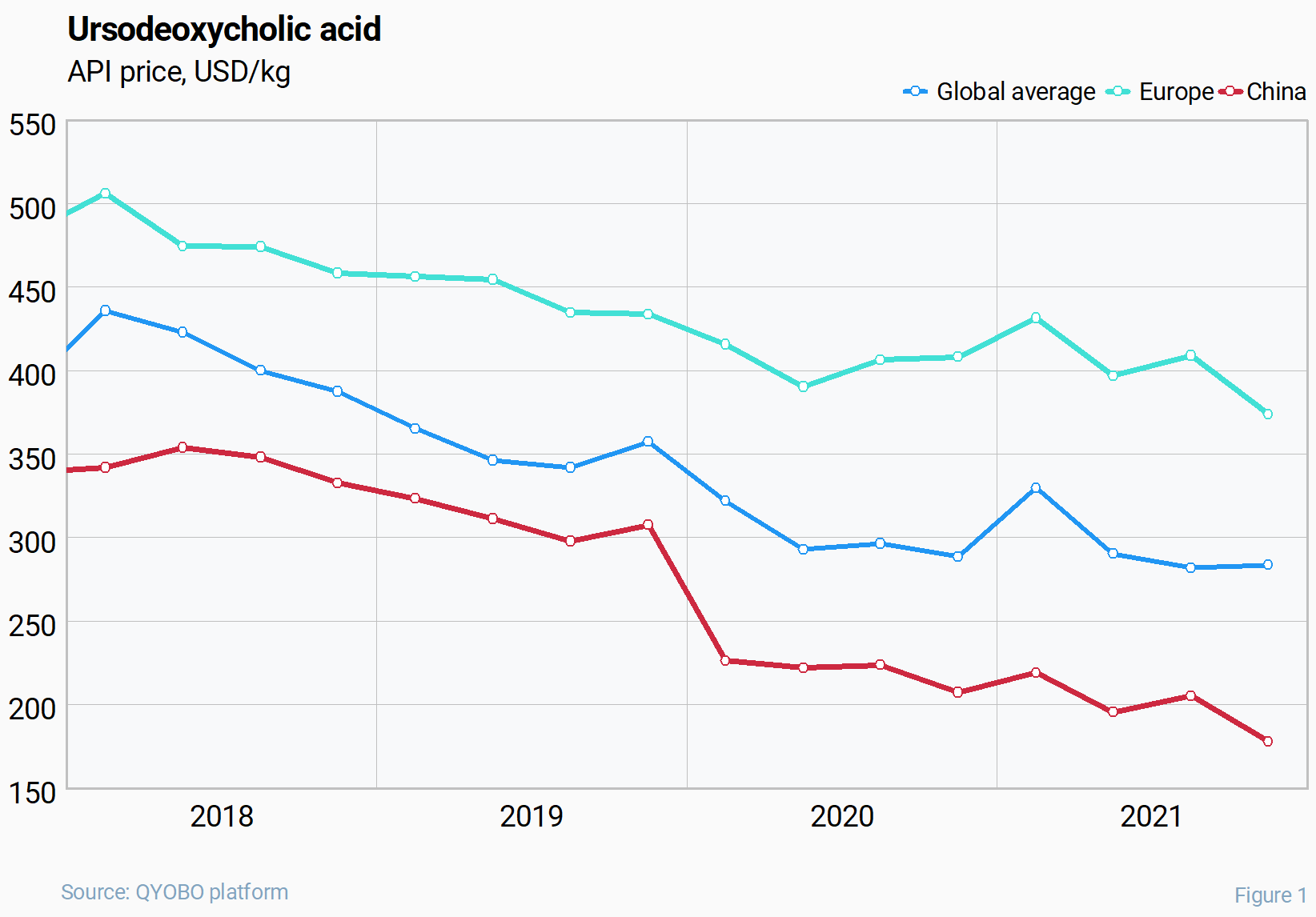 Analysing the trend over the last 4 years to date, global prices for UDCA decreased by 35 % experiencing only a temporary boost by 14% at the end of 2020 and going into 2021. For Chinese exports of this API, the prices fell even more dramatically in the same period – by 48% with the most rapid short-term decrease from 308 USD/kg in Q4 2019 to 226 USD/kg in Q1 2020 (by 27%). In contrast, prices from European exporters experienced a less significant price decrease (-26% during the observed 4 years). 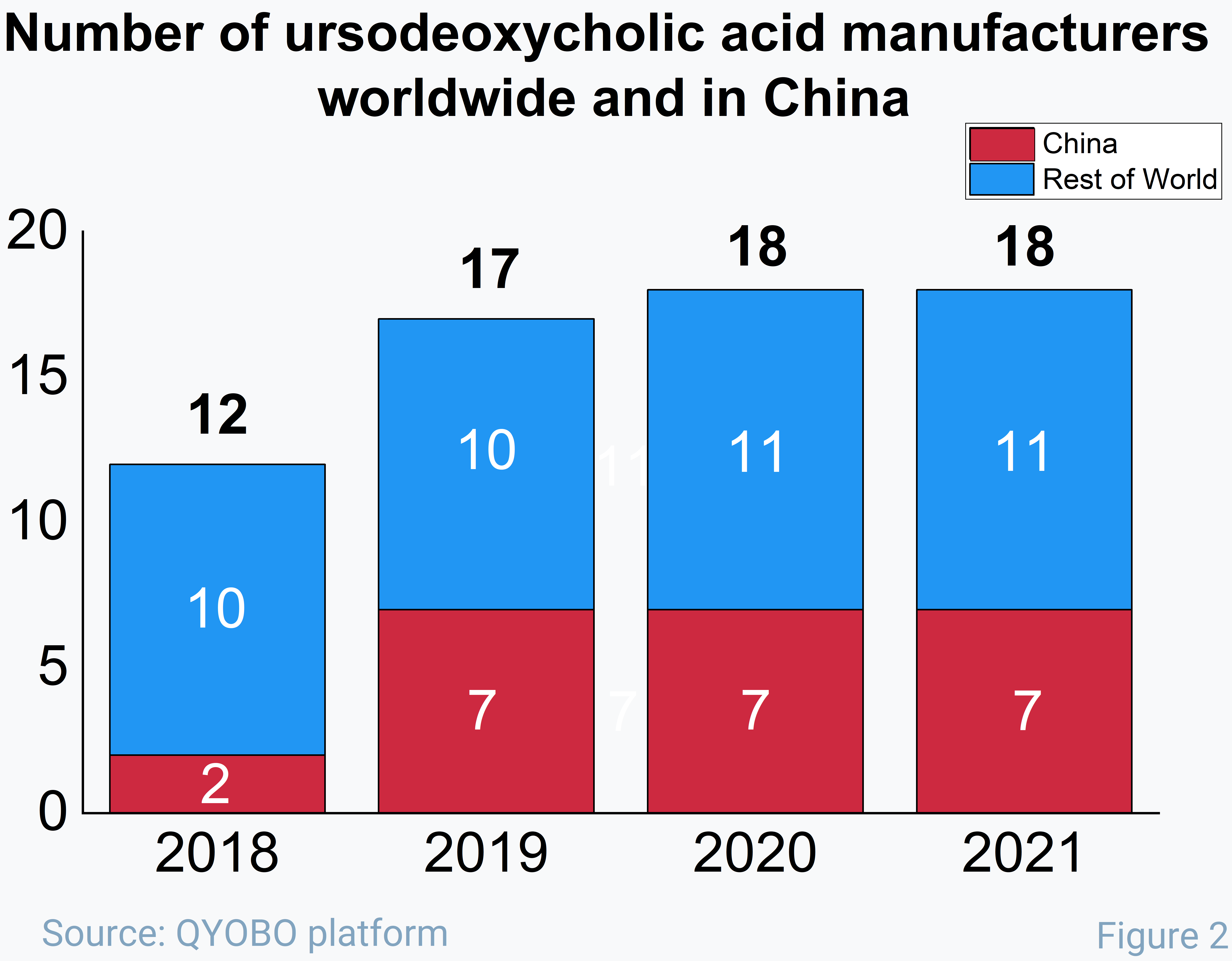 Taking into account that the number of manufacturers considerably increased from 2018 until the end of 2021 (see figure 2), which enhanced the competition on the market, this general downward trend for the UDCA prices becomes more clear: prices from China, where the largest number of new players appeared on the market, had the largest decrease in the last 4 years.

Looking at the recent price history, in 2021 global prices ranged between 180 USD/kg and 453 USD/kg with an annual average price of 301 USD/kg (figure 3.1). By pharmacopeia (figure 3.2), the lowest prices in 2021 were for UDCA conforming with the European Pharmacopeia (EP) which was -36 % less expensive than mthe average price across all trades, whereas UDCA conforming with the US Pharmacopeia (USP) turned out to be 30 % more expensive than the market average (see figure 3.2). Prices for the grades which met further processing steps (direct compression and micronization) were 11% and 35% higher than the average price respectively.

With the currently renewed dual control of energy consumption policy by the Chinese National Development and Reform Commission (NDRC) in 2021, the price trend could take a turn. With this policy, Chinese provinces with particularly high energy consumption will be subject to restrictions for total energy consumption and energy intensity. This led companies to operate at off-peak hours or power rationing or even forced some manufacturing sites to shut down (see QYOBO article). With the majority of UDCA manufacturers now located in China (see figure 4.1) the risks of supply chain disruptions of the API are likely to increase. This becomes even more clear after taking a focused look on where UDCA manufacturers are located within China (Figure 4.2): 5 out of 7 manufacturers are based in provinces which were strongly affected by the policy. 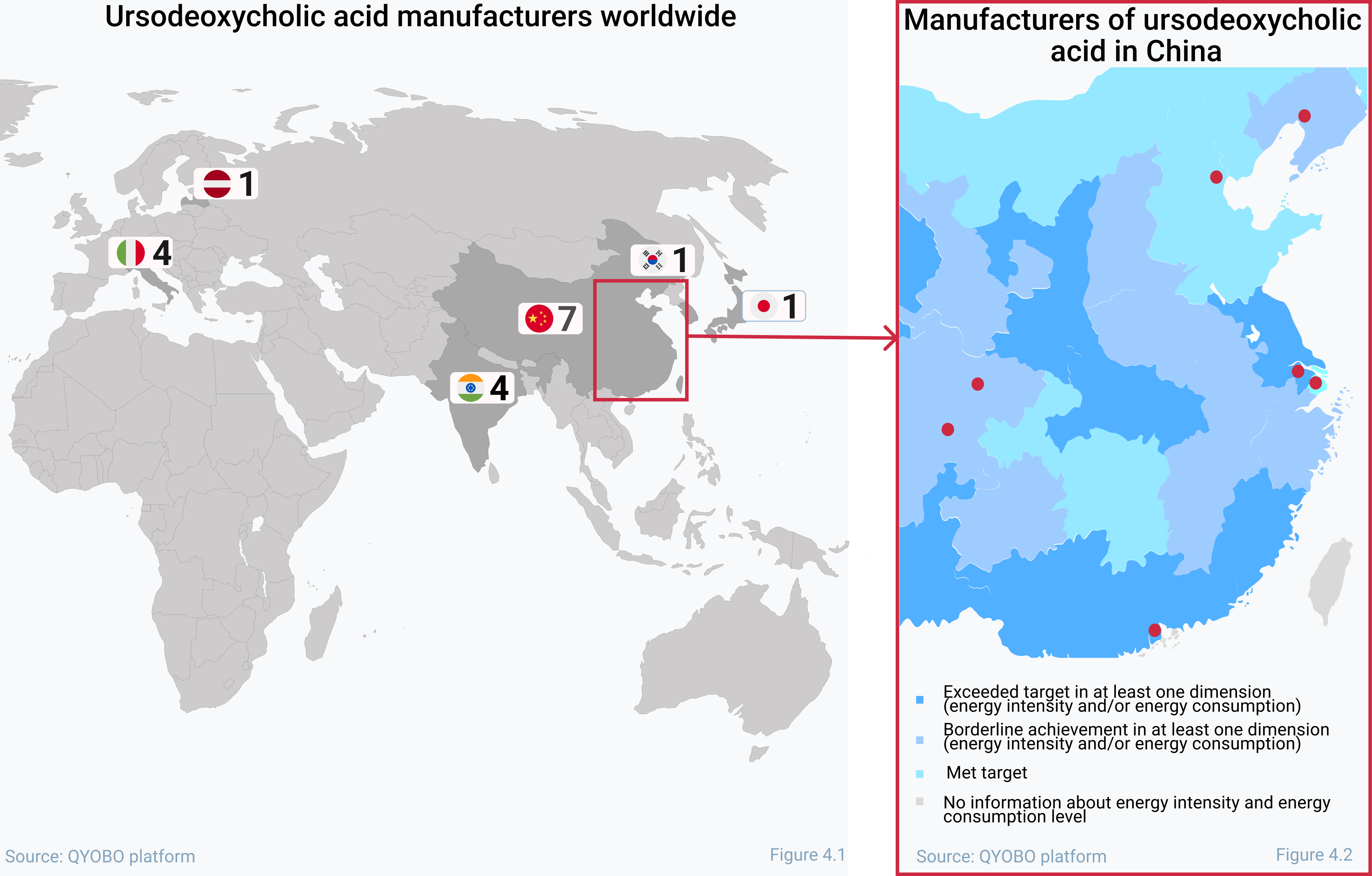 With this in mind, being more autonomous from the Chinese UDCA supplier market could be a required move for western pharmaceutical companies to maintain a stable supply chain on the API. An important step towards this is the qualification of new suppliers and, therefore, supplier audits, which secures standardized quality requirements and provides transparency along the supply chain. That’s why Qualifyze, another German start-up, has created the first online platform for supplier audits that connects pharmaceutical companies, suppliers and auditors worldwide. With just a few clicks, they can provide suppliers audits after a customer request and enable the tracking of all Corrective and Preventive Actions (CAPAs)**. UDCA suppliers that have already been audited by Qualifyze, and for which Qualifyze have existing audit reports, are Dipharma SA and ICE Spa in Italy and Grindeks JSC in Latvia.

* a drug with the ability to prevent damage to the liver

² National Library of Medicine, 30 May 2020.
Ursodeoxycholic acid as a candidate therapeutic to alleviate and/or prevent COVID-19-associated cytokine storm

Ukraine vs. Russia: How the current political conflict could affect the API market