15 December 2021, Munich – 2060 – By this time, China plans to be climate neutral.1 One step towards this goal is the dual control of energy consumption policy, that’s been renewed by the National Development and Reform Commission (NDRC) in 2021. The Chinese government ordered the suspension of production and limited electricity by high-energy consuming industries, which led to shutdowns and power cuts in several Chinese provinces.2 For example, in provinces such as Jiangsu, Yunnan and Zhejiang, power rationing was driven by the excessive implementation of the dual control policy, which saw local governments ordering factories to cut back operation in order for them to meet their dual targets on total energy consumption and energy intensity.* In other provinces such as Guangdong, Hunan and Anhui, factories were forced to operate in off-peak hours to prevent power shortages.3 The province Jiangsu, which together with Guangdong accounts for around 20 % of the country’s industrial capacity and where numerous pharmaceutical manufacturing sites for APIs, intermediates and solvents are located, exceeded both the target for total energy consumption as well as energy intensity.4 In September, the local authorities implemented special energy-saving supervision for enterprises that have an annual energy consumption equal to 50,000 tons of standard coal or more and larger manufacturers which surpassed the two targets for total energy consumption and energy intensity.

This resolution affected over 300 enterprises in Jiangsu, which effectively led to production shutdown for numerous chemical plants.5 Overall, there are around 20 provinces in China affected by that policy since August 2021. So with decreasing operating times (due to e.g. offpeak operation), cuts in production output as well as shutdowns becoming more frequent, supply chains for APIs and intermediates will likely be more tense in the near future.

The QYOBO platform – with its company profiles on API and intermediate manufacturers worldwide – now also provides deep insights into manufacturing locations and resulting supply chains. In early 2021, the platform will allow users to automatically assess their supply chain robustness for any product and provide a proactive supply risk summary. Based on a prototype of this functionality, we analysed and compared the data for two (randomly selected) APIs – gemcitabine and pantoprazole sodium. For each link of the supply chain, we assess the potential impact of the dual control policy in China.

Where are MA holders sourcing from?

We start with the most downstream link of the supply chain – answering the question where Marketing authorization holders (“MA holders”) are sourcing their APIs. Based on the QYOBO platform, figure 1 shows the supply chain links between a handful of randomly selected MA holders for gemcitabine drugs and their respective API manufacturers. Based on the diverse API manufacturing footprint ranging from China, India, Israel, Taiwan to the USA, at first sight there is no indication of a risk exposure (e.g. to supply disruptions from curbed API manufacturing output) from the dual control policy in China. Compared to many other molecules, it is actually quite remarkable how most of these companies are doublesourced (or more) for this molecule. 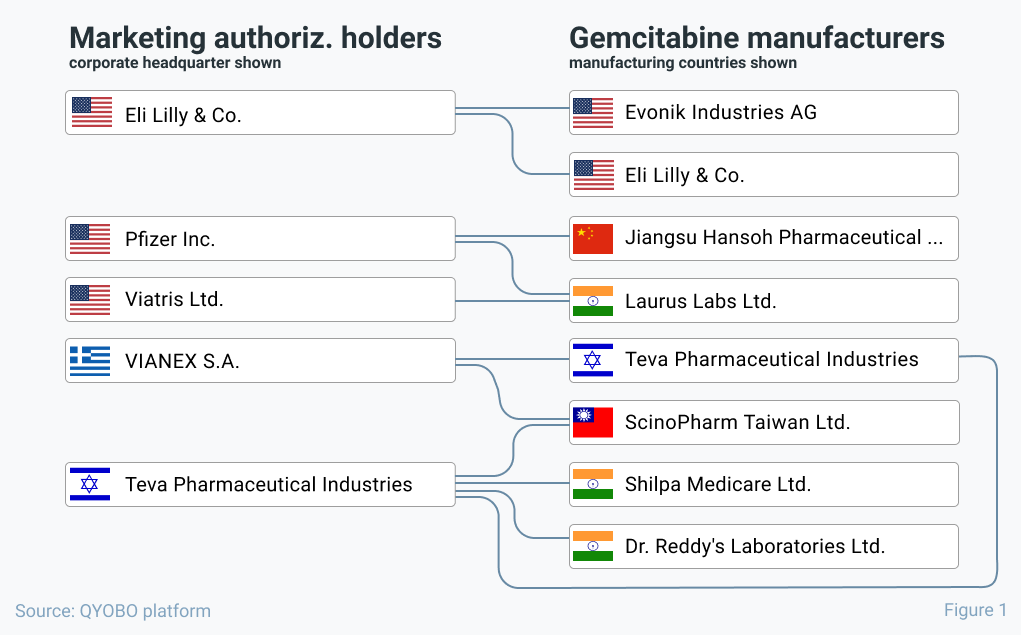 A similar analysis for pantoprazole sodium** indicated similarly robust links between MA holders and API suppliers as for gemcitabine – hence no immediate supply chain risks from the dual control policy seems to be the case for either substance.

Where are API manufacturers located?

With its global supplier lists, the QYOBO platform provides an additional angle at global supply chains. For gemcitabine, our platform lists 48 suppliers (manufacturers and traders), thereof 33 manufacturers. The Top-5 manufacturers by size are shown in figure 2 respectively. This “bird-eye perspective” on the gemcitabine manufacturer landscape indicates that – with the exception of Jiangsu Hansoh Pharmaceutical Co., Ltd. – the most relevant API manufacturers are located outside of China and thus not directly affected by the dual control energy directive. Again, pantoprazole sodium, shows a similar picture with the vast majority of its manufacturers located in India and no large producers in China.

Where are intermediate manufacturers located?

Hence in the third and final step, we dig deeper into the footprint of Chinese intermediate manufacturers***, which – among others – supply much of the Indian pharmaceutical industry. From this analysis, it becomes much clearer that an indirect risk from the dual control policy is in fact the case. A pressing example for this is that Jiangsu Coben Pharmaceutical, one of the key gemcitabine intermediate producers – supplying Dr. Reddy’s, Hetero Drugs and Shilpa Medicare – is situated in the province Jiangsu which exceeded targets in both energy intensity and energy consumption levels (see Figure 3.2).

Overall, considering the close ties between Indian API manufacturers and Chinese intermediate manufacturers, an indirect impact via their upstream sources in China should be expected. However, there is no one-size-fits-all answer as the risk varies for each drug substance depending on its specific manufacturing footprint. For a deep-dive into the supply chain of a particular substance, reach out for a demo of the supply chain feature via sales@qyobo.com.

* the energy use per unit of GDP (gross domestic product)

**** specifically for the intermediate 2-Chloromethyl-3,4-dimethoxypyridine hydrochloride there are e.g. Nifty Labs, Aastrid International, R.P. Industries and many more

Certificate of Suitability to the monographs of the European Pharmacopoeia

5 ECHEMI, 18 September 2021.
Dual Control’ in a major chemical province! Raw materials skyrocket! The supply is in a hurry!