14 April 2021, Munich – Epilepsy is one of the most common serious neurological disorders with around 50 million people living with this diagnosis.¹ One key medication to treat epilepsy is levetiracetam, which was developed by the Belgian company UCB S.A. and marketed under the trade name Keppra. After being approved by the US FDA in 1999, it has become one of the most popular anti-epileptic remedies.²

In 2011, generic versions of Keppra became available after a key UCB patent had expired.³ In general, generic drugs are more affordable and thus lead to broader availability of essential medicines worldwide. In 2021, 10 years after the first generics entered the market, prices for the drugs ingredients are still decreasing significantly – both for the API itself (levetiracetam) as well as the key intermediate (s)-2-aminobutyramide hydrochloride used to manufacture it.

Over the past two years, levetiracetam prices decreased by 22% – from 93.6 USD/kg in January 2019 to 73.0 USD/kg in December 2020, while prices for (s)-2-aminobutyramide hydrochloride dropped by 49% – from 34.4 USD/kg to 17.6 USD/kg – in the same period. In the beginning of this year prices for (s)-2-aminobutyramide hydrochloride started to stabilize while the levetiracetam API price continued its recent upwards trends since December 2020.

Levetiracetam for the Keppra drug was initially manufactured exclusively in Europe (UCB S.A. – with manufacturing sites in Switzerland and Belgium) and the United States (Ampac Fine Chemicals LLC, subcontractor of UCB S.A. with a manufacturing site in California). As the demand for the API increased and other API manufacturers entered the market, production shifted to Asia. Nowadays, drug manufacturers can choose from dozens of levetiracetam manufacturers, most of them are based in India (17), China (8) and two sites in Puerto Rico and Mexico (see figure 3). 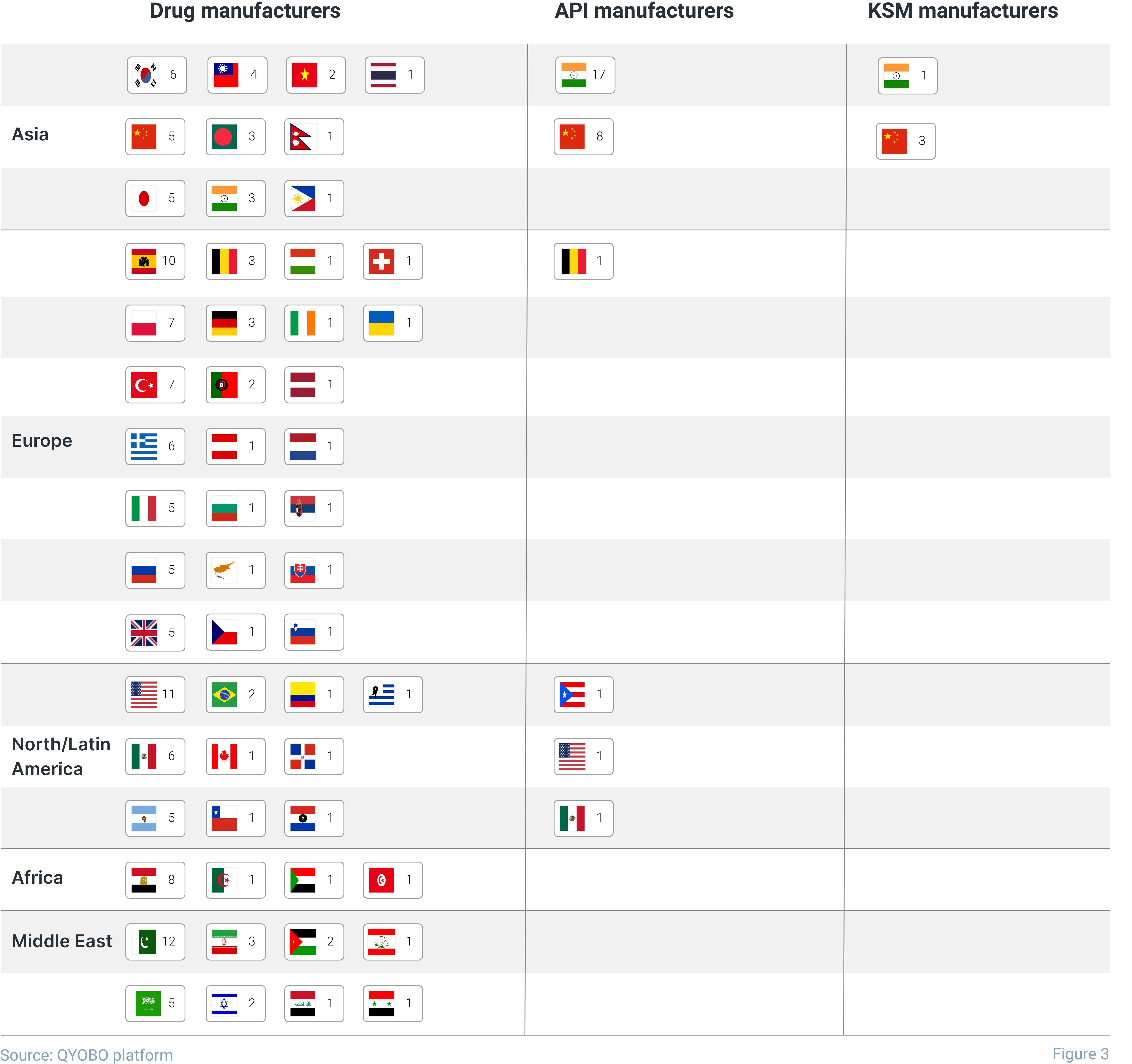 While this leaves many alternatives to select an API manufacturer, only four major manufacturers for the key intermediate (s)-2-aminobutyramide hydrochloride are globally active. Three of those are based in China, while the most prominent manufacturer (the only one with a valid USDMF filing) is Emmennar Pharma based in India. With this in mind, QYOBO helps its clients understand global supply chains (see figure 4) and identify potential risks along the entire value chain from the base chemicals or intermediates to the API and finally the finished drugs. As such, the QYOBO platform gives pharmaceutical and chemical companies unprecedented opportunities to build and monitor robust global supply chains. 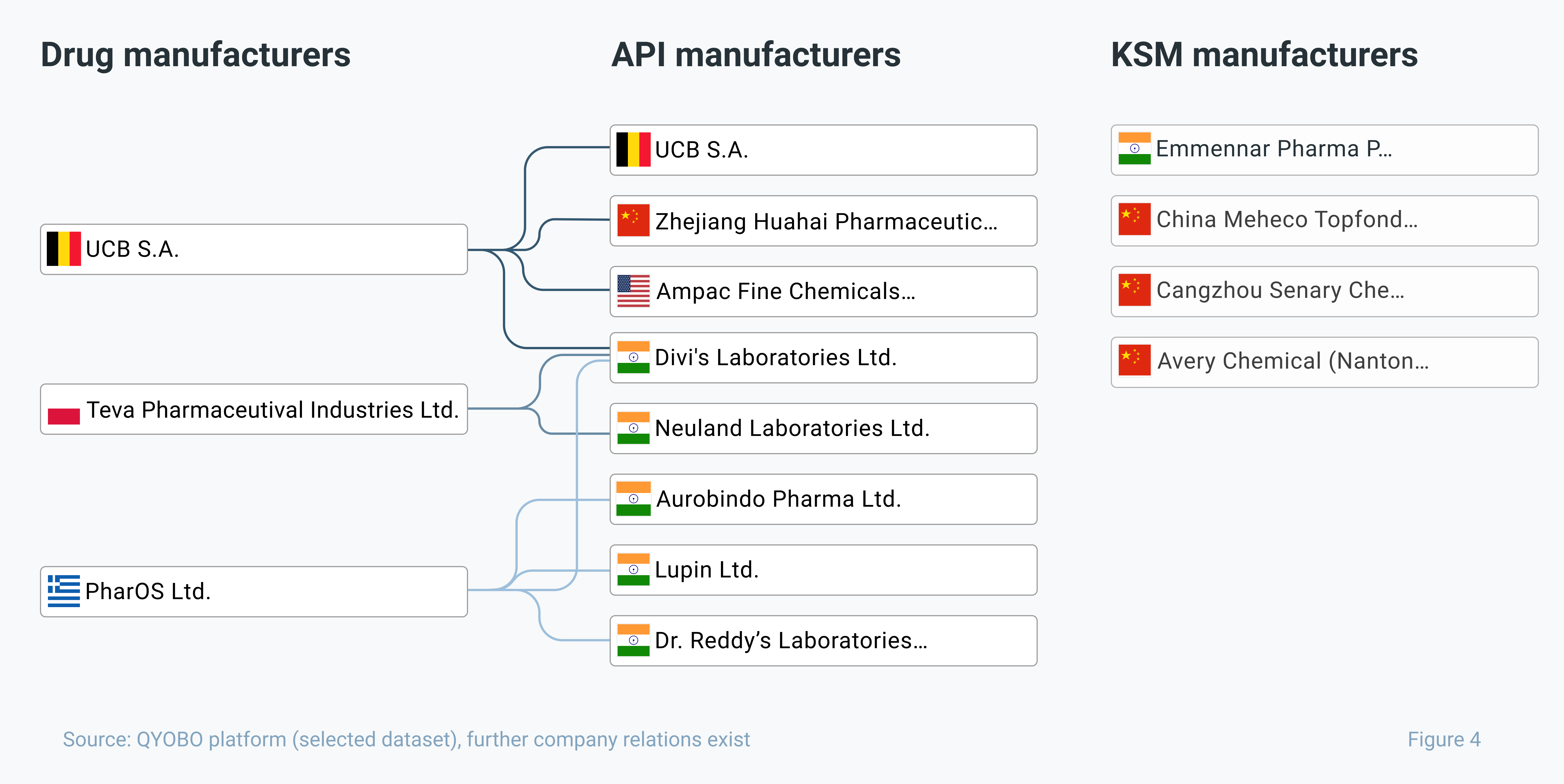 Prices are weighted average prices (weighted by trade volume) for each month. Prices reflect FOB prices (free on board), excluding freight or insurance cost. The price curves for a given substance include data points for all known salts for this substance.

This report has been generated leveraging the QYOBO market analytics platform. The big-data powered platform combines trade data, regulatory information and further enriching financial data on the market from a large variety of distributed databases around the globe. For its API benchmarks, QYOBO processes over 25 million trade datasets from 20 countries (e.g. Argentina, Chile, China (partially), India, Kenya, Mexico, Russia, the USA, Vietnam) in 8 languages. The time frame assessed for this analysis was January 2019 through February 2021.