14 May 2020, Munich – Primarily driven by lower prices for active pharmaceutical ingredients (APIs) manufacturing has mainly moved to India and China over the past decades. Estimates put about 70-80% of production for active pharmaceutical ingredients in the two Asian countries, which politicians in Europe and North America regard as a considerable geopolitical challenge. As governments scramble to get sufficient medical supplies to manage the current situation, the corona crisis could become a turning point for the pharmaceutical industry – potentially reversing the eastward outsourcing trend.

The issue of dependency of the EU vis-à-vis China, and other countries […] was on the table before COVID-19,” said Stella Kyriakides, European Commissioner for Health and Food Safety and one of the key officials in Brussels’ pandemic response. “[The crisis] has highlighted this problem and we need to look at it, we need to ensure that we reduce our dependency on other countries.” ¹

India and China have become the powerhouse of pharmaceutical manufacturing over the past decades, the majority of active  pharmaceutical ingredients (APIs) in drugs worldwide are nowadays produced foremost in these two countries. Taking the commonly known fever and pain medication Paracetamol (Acetaminophen) as an example, eight of the twelve leading API manufacturers supplying Europe and the United States are based in India and China (compare figure 1). 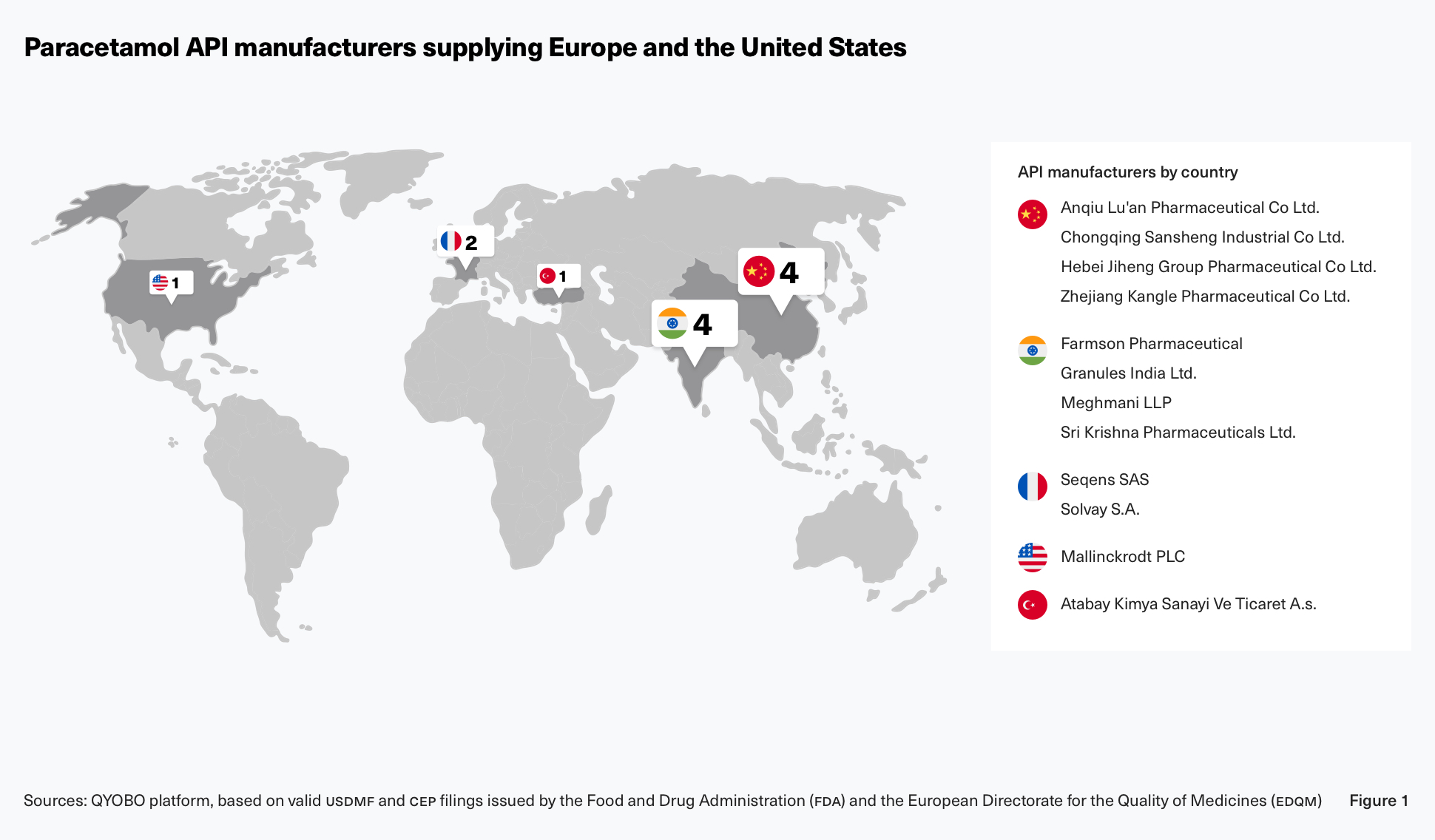 But this is not the only example for India’s and China’s increasing importance in API manufacturing. As for the antiinflammatory remedy Diclofenac, a net of eight manufacturing sites were added in India and China (four in each country) between 2005 and 2020 whereas a single production facility was added in other parts of the world (as seen in figure 2). The type 2 diabetes treatment Metformin experienced an even more significant increase of 19 additional sites in India and China (18 in India and 1 in China) compared to five in other countries. 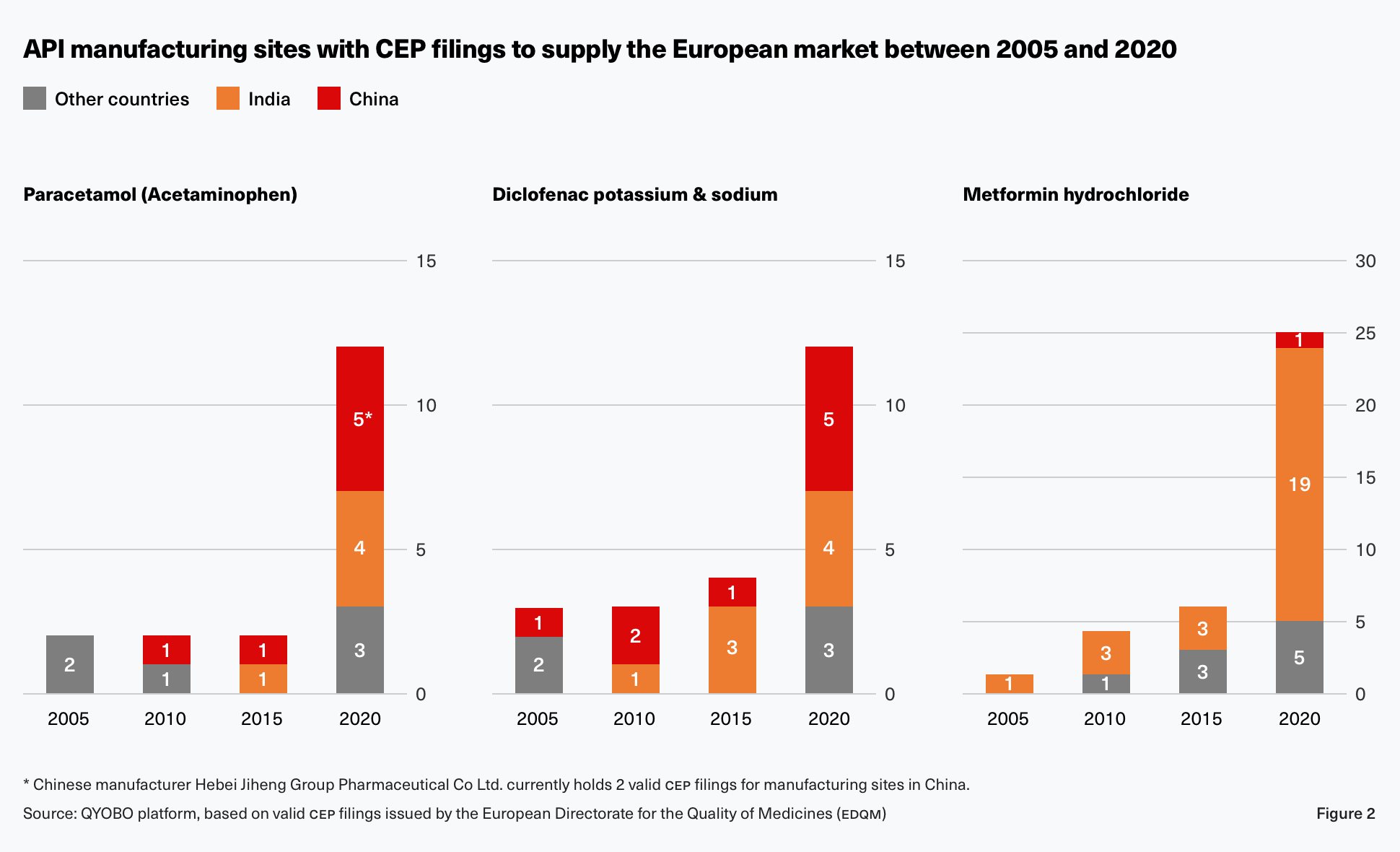 The main reason for this development are more competitive prices. As governments and health insurance companies worldwide expanded the use of public tenders and RFPs to keep rising health care costs in check, price became the primary deciding factor. Market participants such as generics companies were thus forced to work with the most affordable sources. This resulted in the outsourcing or the transfer of the companies’ own API production to lower cost countries like India and China. This cost advantage can be quite significant as shown by Paracetamol which could be sourced at a 30-50% lower price from India and China compared to suppliers in North America over the last four years.

Already in 2009, The New York Times stated that “experts and lawmakers are growing more and more concerned that the nation (United States) is far too reliant on medicine from abroad” ². Little has changed since – even as Western policy makers became progressively worried about the dependency on India and China in the context of increasing drug shortages over the past years. ³ ⁵ Severely demonstrating the fragility of global supply chains, the corona crisis gives a new dynamic to the discussion. As governments scramble to get sufficient medical supplies to manage the ongoing situation, export restrictions issued by the Indian administration for some essential APIs (including Paracetamol and Metformin) ⁶ have done little to increase confidence in the current system. While some of these restrictions were lifted four weeks later, ⁷ to date, the export of Paracetamol remains restricted. As a result, the corona pandemic could become a crucial turning point for the pharmaceutical supply chain as Western countries are looking to bring manufacturing back from Asia (dubbed “backsourcing”).

Politicians in Europe and North America have identified the reliance on third countries for pharmaceutical manufacturing as a geopolitical challenge. In a meeting on March 12, 2020, the Pharmaceutical Committee – an expert group of the EU Health and Food Safety Commission department of Commissioner Kyriakides – decided to “assess the EU’s dependency on manufacturing of active pharmaceutical ingredients in third countries, as this is one important cause of shortages”. With a similar motivation, U.S. senators Rubio, Warren, Cramer, Murphy and Kaine introduced the “Strengthening America’s Supply Chain and National Security Act” on April 19, 2020, to analyze the “reliance on pharmaceutical products” from “China and any other country as determined by the Secretary of Defense for national security purposes”.

In summary, the corona crisis could become a turning point for the pharmaceutical industry, potentially reversing the eastward outsourcing trend. Whether this transition will take place and at which speed will depend on the relative importance of supply security compared to cost in the aftermath of the COVID-19 pandemic.