20 August 2020, Munich – Prices for penicillins increased by 14-20 % during the first half of 2020 with prices for some penicillin APIs “shooting up” more than 40 %. Governments worldwide have undertaken efforts to decrease reliance on API imports from Asia.

After a turbulent first half of the year, the QYOBO team sums up the key developments in the API market. In a series with each article focusing on a different group of APIs we will analyze the market dynamics in 2020. The outbreak of CoViD-19 obviously plays a key role, with governments around the globe putting supply security on top of their agendas, e.g. by addressing supply chains for APIs which are historically highly dependent on India and China. We’ll get back to that point later on in this article.

In the beginning of this series, we will take a closer look at the group of anti-infectives, concentrating on penicillins, which received widespread media coverage lately *.

The World Health Organization (WHO) recommends antimicrobial therapy to treat CoViD-19-related SARI** and severe pneumonia with penicillins, emphasizing positive outcomes of treatments involving the use of ampicillin, cloxacillin and benzylpenicillin. Therefore QYOBO compiled an index across this group of anti-infectives to provide an overall picture of how these substances were affected during the first part of the year. The resulting “QYOBO penicillins index” *** includes a total of 43 different substances, which are all part of the subgroup penicillins of the larger group of anti-infectives****.

Prices have historically declined for this group over the past two years and this trend continued in early 2020. Starting at 100 base points in January 2020, prices first dropped to 96 base points in March 2020. Subsequently prices increased steadily, reaching a 6-month-high of 114 base points in July 2020.

To provide a more granular perspective into the market trends for specific substances, amoxicillin and benzylpenicillin will be featured in detail: 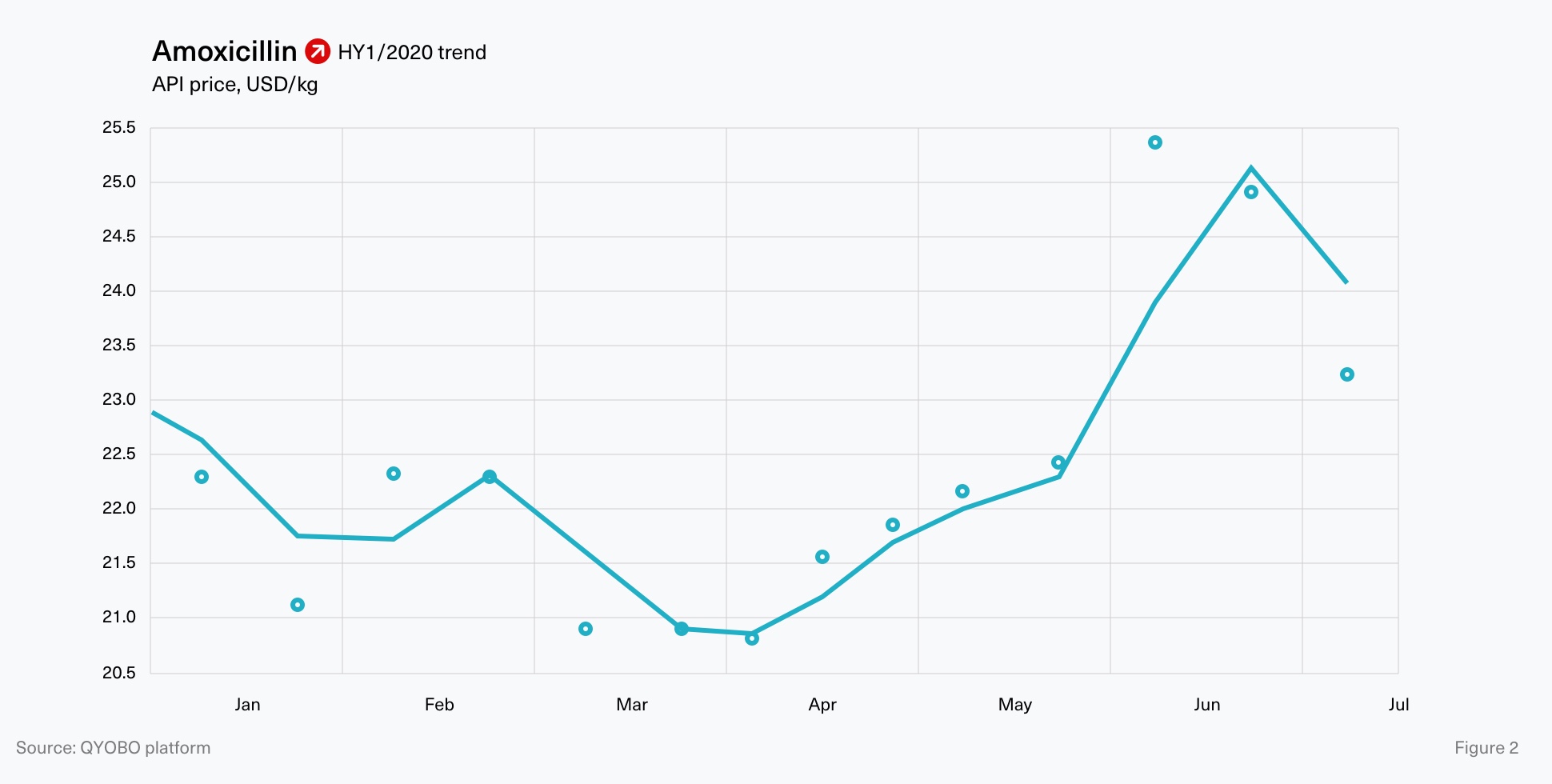 With around 50 % of the global trade analyzed for penicillins, amoxicillin***** makes up for the largest fraction in monetary terms. After a slight drop in the first quarter of 2020, the global average price increased from around 21 USD/kg end of March to a peak of 25 USD/kg in the second half of June. However, the market appeared to be quickly cooling off again with prices dropping to around 23 USD/kg towards the beginning of the second half year. 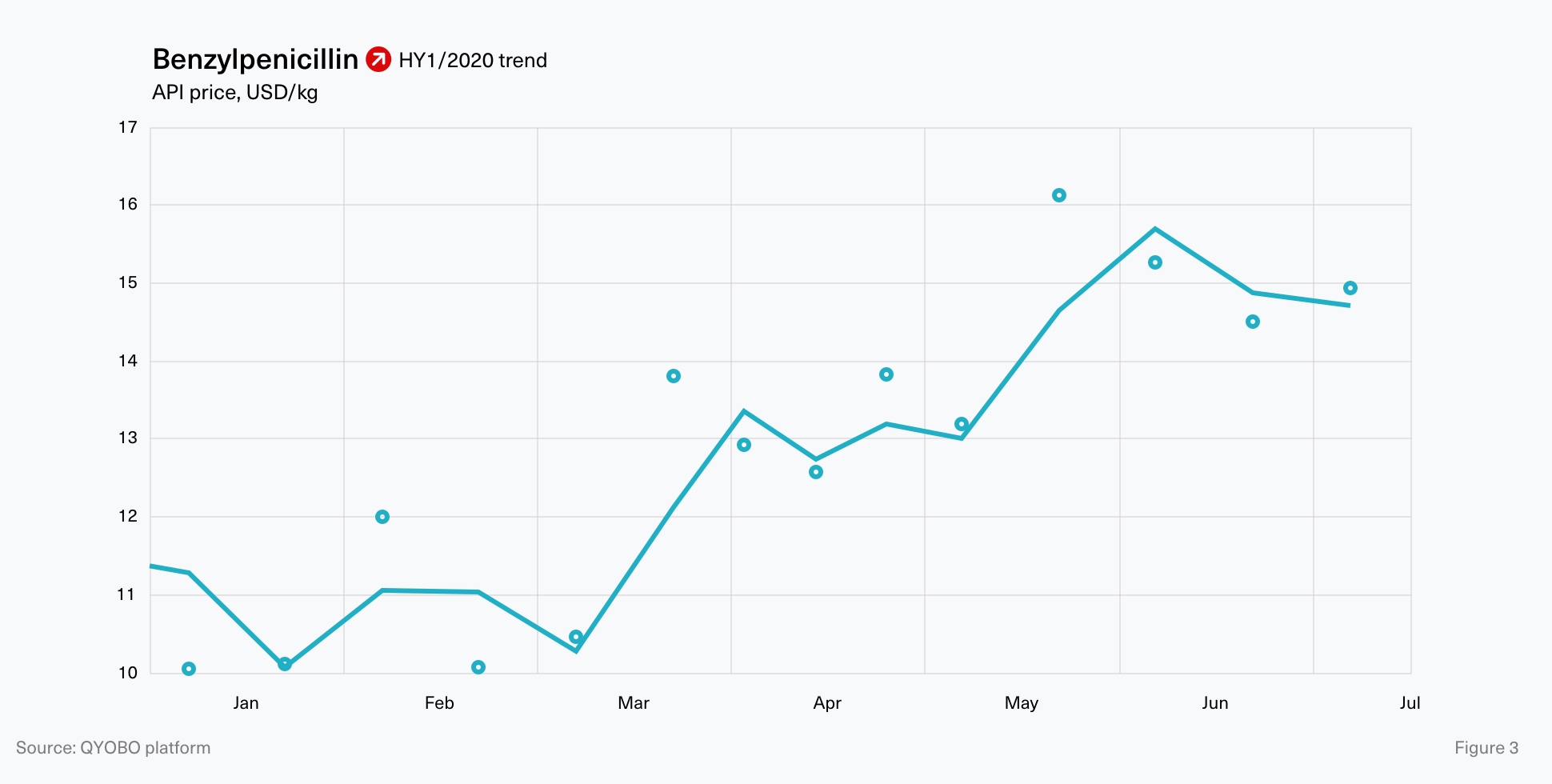 Being one of the drugs recommended by WHO as a treatment against CoViD-19-related symptoms for children², the market price of benzylpenicillin API was severely affected by the developments in the first half of 2020. With minor fluctuations the global API price increased by 42 % (see figure 3).

As the broad majority of Indian antibiotics manufacturers – which produce a larger part of the global antibiotics finished drug supply – imports benzylpenicillin from China for further processing, most of the global supply depends on China. Which makes it the most dominating exporter of benzylpenicillin – with few manufacturers, e.g. Sandoz in Austria, remaining elsewhere.³

An estimated 70 % of the APIs used in India’s pharmaceutical manufacturing are sourced from China.⁴ Aiming to decrease this dependence amidst a geopolitical crisis between the two countries, the Indian government recently announced subsidies of up to 1.3 billion USD to boost domestic production.⁵

Western countries are considering similar measures. In mid July the European parliament highlighted the geopolitical dimension of medicine shortages with China and India producing 90 % of the world’s penicillin. As a result, future EU strategy will introduce measures to reduce direct dependence on raw materials imports from non-EU countries.⁶

Beyond the EU, the US⁸ and Australia⁹ face a similar dependency on imports of drug raw materials, estimating 80 % (respectively) of their pharmaceutical ingredients coming from China.

In summary, the corona crisis could become a turning point for the pharmaceutical industry, potentially triggering the increase of domestic manufacturing of APIs.

In the generics industry, cost competitiveness is a crucial factor. Generics companies need to work with the most affordable sources in order to win big volume tenders by health insurances. But already before CoViD-19, the increasing frequency of shortages has given supply security a higher priority. The current crisis has given new dynamic to this development with many companies (and leading industry associations such as Pro Generika e.V.) arguing for a more balanced approach considering further factors like supply security in addition to only cost competitiveness.

Prices are weighted average prices (weighted by trade volume) for each month. Prices reflect FOB prices (free on board), excluding freight or insurance cost. The price curves for a given substance include data points for all known salts for this substance, e.g. amoxicillin base, amoxicillin sodium and trihydrate for “Amoxicillin”.

This report has been generated leveraging the QYOBO market analytics platform. The big-data powered platform combines trade data, regulatory information and further enriching financial data on the market from a large variety of distributed databases around the globe. For its API benchmarks, QYOBO processes over 20 million trade dataset from 18 countries (e.g. Argentina, Chile, China (partially), India, Kenya, Mexico, Russia, the USA, Vietnam) in 8 languages. The time frame assessed for this analysis was January through early July 2020.

To provide an accurate representation of the group, the weighting method for the index is “Total trade weighting” across the penicillins subgroup of anti-infectives group – according to WHO Anatomical Therapeutic Chemical Classification System. The weight for a substance (i) in any given month (m) in the index is based on the total trade (as a product of price pm,i and the volume vm,i) for the respective month. p0,i is the average monthly price of the base index month, January 2020. This approach limits the influence from substances with smaller overall trade size compared to substances with larger trade sizes.

First half of the year

QYOBO’s clients include API manufacturers and pharmaceutical companies in Europe and beyond. In 2019, QYOBO won BASF’s Digital Market Challenge against over 100 startups worldwide. The company has recently been recognized as a “Digital Innovation” by the German Federal Ministry of Economic Affairs and Energy (BMWi) and is one of the 10 most innovative startups according to WECONOMY/Handelsblatt.

Disclaimer: The information in this article is not intended to be used for medication purposes. Please do not self-medicate and consult a physician/doctor for any questions with regard to your personal medicalneeds. This assessment has been prepared adhering to the highest quality standards based on a variety of external data sources (see sources) with the purpose of making distributed information accessible to a broader audience. The information contained in this document is provided on an “as is” basis and QYOBO GmbH assumes no responsibility or liability for the completeness, accuracy, usefulness or timeliness of the information provided. This article contains links to external websites operated by third parties upon which QYOBO GmbH has no in+uence. QYOBO GmbH does not assume any guarantee or liability for third party content.